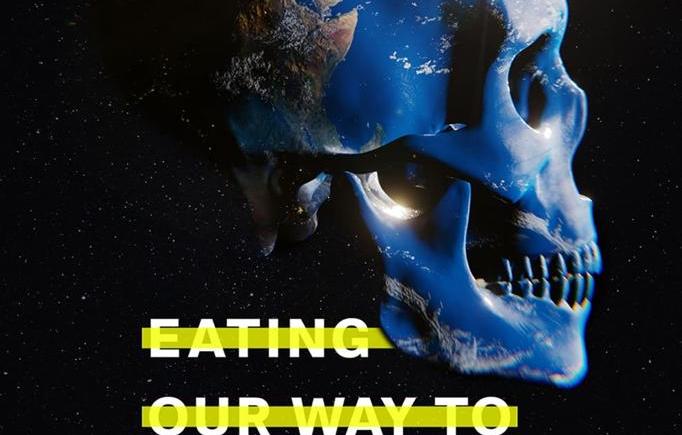 Our next meeting and seed swap, see details on main pages.

In the meantime below are some historical projects that Transition Telford has been involved in.

We managed an excellent film viewing late in 2021

We had a very successful day making Christmas rag wreaths from recycled materials.  We started off with a huge pile of fabric, ribbons and wire wreath frames.  During the morning we were donated even more stuff.   We had lot of people come and start making their rag wreaths – at first with help from members of our Rethreads group – but eventually people who had learnt to make the wreaths during the morning were confidently newcomers how to do it.  We had various styles of rag wreaths: shaggy or short; multi-coloured or restrained palettes of colour and even one from a single red and white Christmas fabric.   Rag Wreaths are very simple to make and several children had a go too.  But as well as the lovely wreaths that were produced – there was a lot of conversation amongst participants and new friends made.

As well as our rag wreath making there were lots of other activities going on – Christmas cracker making,  Christmas ornaments from recycled materials. food stalls, art and craft stalls and the monthly repair cafe where a broken CD player, a treasured watch with a faulty and several items of clothing were all mended. 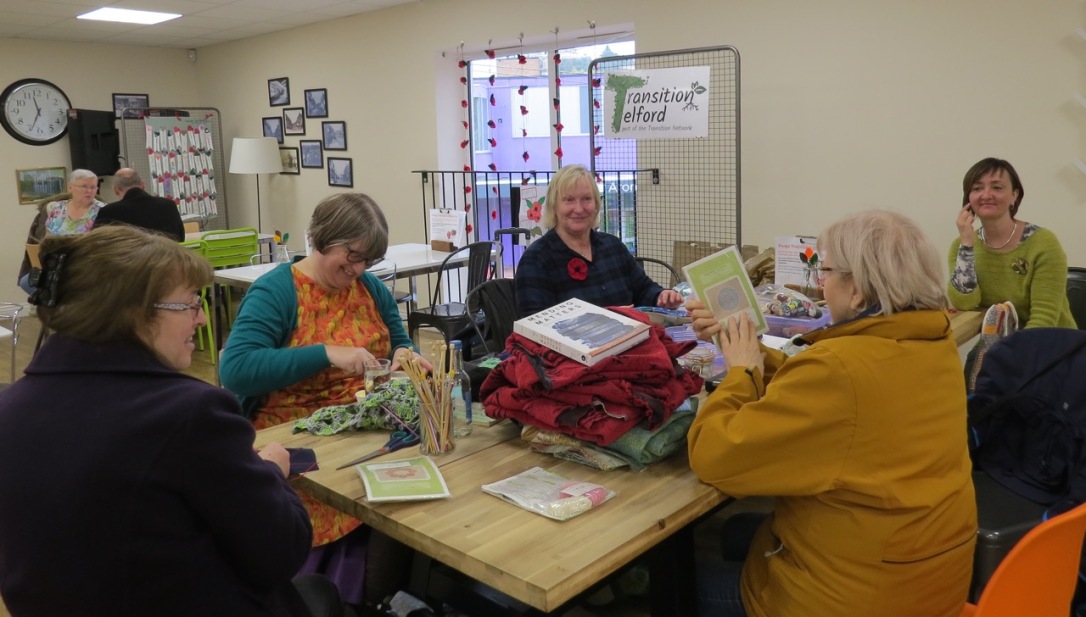 We had a successful launch of our Rethreads Craft Group at The Wakes in Oakengates on Saturday 10th November where we make use of recycled, scrap or unused fabrics and other textiles as well as learning and sharing new skills and raising awareness of the high cost to the environment of the manufacture and use of textiles. Some group members brought along their own projects but others helped to mend the ties on the cushions that Forge Urban Revival’s Thursday Free Craft Group members had made for the cafe.  Elaine found that she can share her skills when she started to teach Dot how to crochet and Mary started experimenting with a an old tie and ended up with a mobile phone pouch with a handy pocket for a credit card.

The Rethreads group is part of Get Creative at The Wakes – on the second Saturday of each month.  This month there were also courses being run on Drawing,  Sashiko – a form of Japanese stitching, needle felting and crochet. 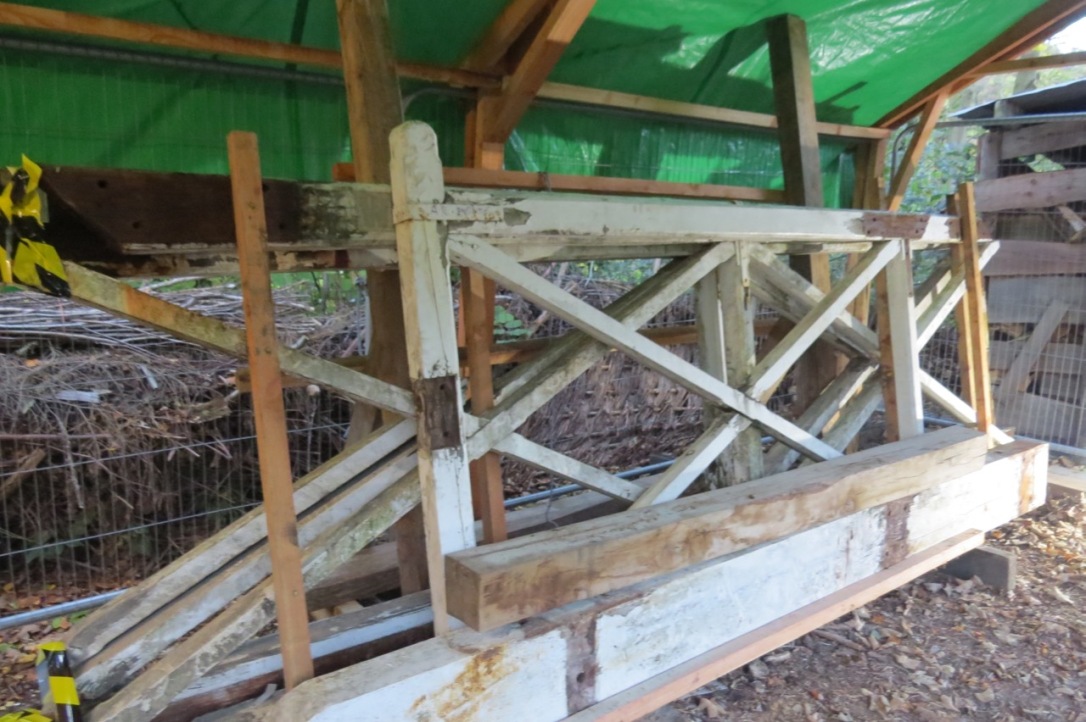 Yesterday evening we were at the launch of the “Jackfield Railway Gates Art and Craft Challenge” by the Smallwoods Association. The Smallwoods Association also had a display and talks about the replacement of the Historic Jackfield level crossing gates, which was really interesting. I was particularly taken with the idea that Ironbridge is about the transition from wood to iron. The Art and Craft Challenge is to encourage artists and crafters to use the wood from the old gates (which unfortunately cannot be repaired as originally preferred. Our stall featured permaculture – what it means, our existing garden at the Greenwood Centre and future ideas. 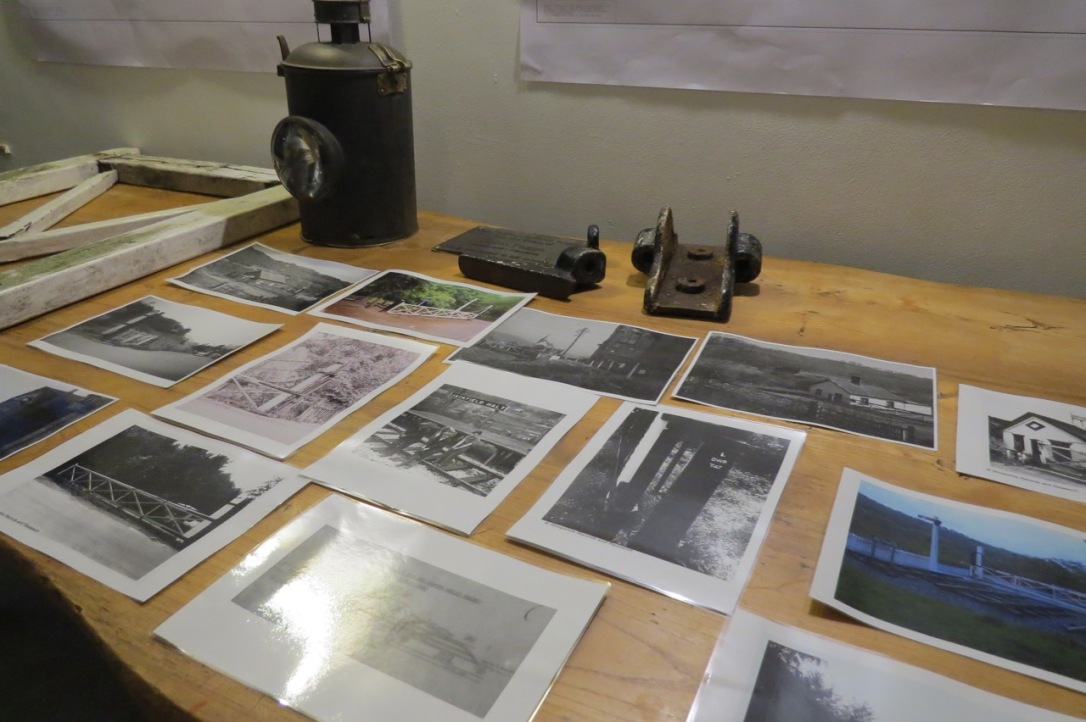 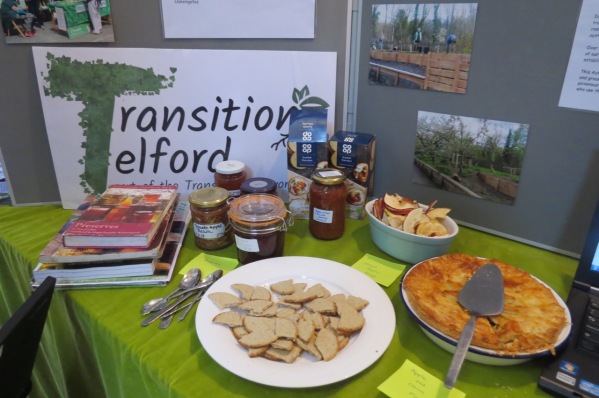 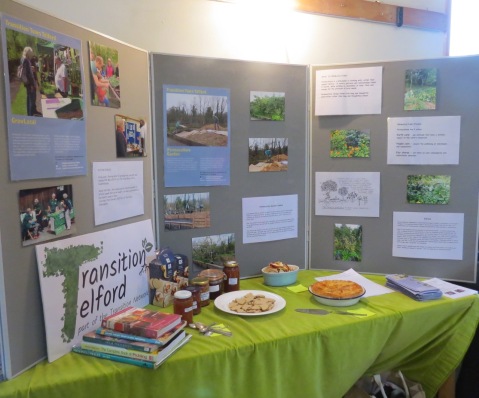 This is our stall at Apple Day at the Green Wood Centre in Coalbrookdale today.  Our display was a progress report on our permaculture garden at the Green Wood Centre.  Lots of people came and sampled our apple tasters – jams and chutneys, dried apple slices and an apple and onion pie.  Rachel’s relish and Louise’s damson chutney were particularly well received. The damsons came from the tree in the Green Wood Centre.  Others were amazed that the pie was so tasty given that it was dinner for Ali’s family on days when there was more week than money.  In response to popular demand we will be putting the recipes on the website.  Congratulations are due to Louise who won the best tasting Apple Pie. 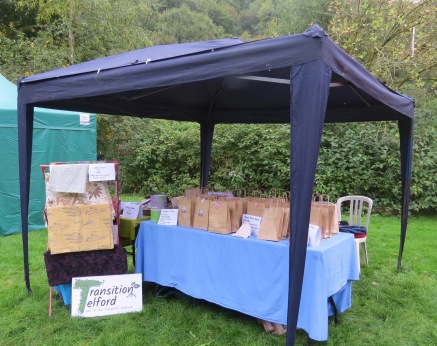 Members of Transition Telford” rethreads Project braved the rain and cold on Saturday 22nd September and organised a stall for the Recreation event organised by Veolia for the heritage Festival weekend.  Our stall featured kits with everything needed to make a Japanese rice bag, a mobile phone stand or a patchwork pin cushion.  The pretty rice bags – traditionally made by in Japan for holding offerings of rice for the gods – were particularly remarked upon.  One young man even bought one to make up as a Christmas present for his sister – she is a climber and he thought that, with its drawstring it would be just the bag for her chalks. All the fabric we used was recycled or leftovers from other projects. 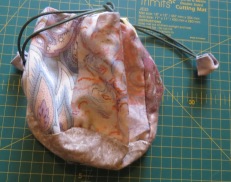 We also had lots of pieces of recycled fabric – large, medium and small – that crafters could take and put to a good use in their own projects.  A few years ago members of our group made lots of bags so the ones we had left were for sale as well.  our stock of bags is beginning to diminish. 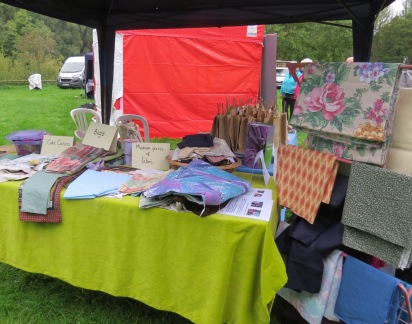 We attended Telford Repair Cafe on Saturday 29th September from 10.00 am till 2,00 pm.  The Wakes, Theatre Square, Oakengates, Telford TF2 6EP.  We had our sewing kit at the ready for repairs to clothing.  We mended the seam of a cardigan, replaced the elastic in a pair of pyjama trousers, darned a whole in a sock and patched a pair of jeans.  We supported a home produce stall where we brought along the longest courgette I have ever seen as well as apples, sweetcorn and green tomatoes.  Men in Sheds were also there – taking wooden items  of furniture to mend as well a knives to clean and sharpen.  An appliance wizard called Andy also came along and mended a battery operated clock and an electric toothbrush.  The next repair cafe will be on Saturday 27th November.